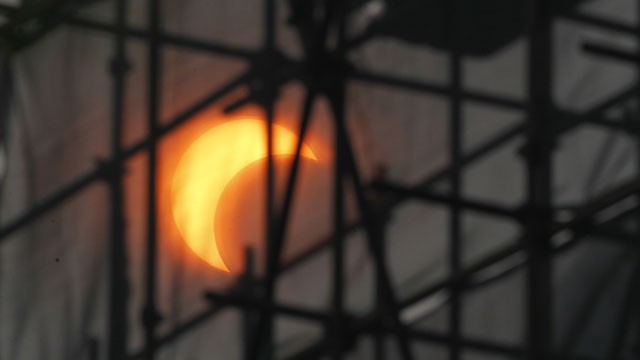 Phrase To Use
[didn't/don't/doesn't] want this

They were sat on the rooftop, silhouetted in worlds above.
He’d thought to propose here, let the sky and their lives tip into new horizons. But, she’d say nothing, with a voice confined to nightmares. She never woke from them, but whimpered and sobbed in private daylight. He’d always find her, hold her, and only days ago did he manage to lift her up and coax her outside.
She was still lost though, and sat cross-legged now, not dangling her legs over the edge as usual.
Poor angel with her virtue bruised. He would have laid it over his skin if it would heal her.
Wish that he could, both heal her and revive his hope. He didn’t want this; to be swept into such sorrowful ashes while she grieved. He wanted to be strong and able to save her.
They watched as the moon inched over the sun in indulgent greed, patiently robbing the sky into dimness. He stole a glance at her as her lips parted.
Tell me something, he thought.
She sat her hand on his and her breath warmed his soul.
“Thank you,” she whispered.
He held her closer. And those ashes, they took to flight.

I'd love to know your thoughts on this, so do share.

Novel 1 - Maid For a Gentleman

Afsaneh
1. An aspiring and eccentric writer who thinks of nothing but novel ideas and occasionally cheesecake(n) 2. A being in severe need of sanity (n)

The Mass Of Labels